Today's film is Housebound.  It comes all the way from New Zealand.  This is one of those movies that I can watch over and over and still be entertained.  It is great!

One of the best aspects about this film is that is seamlessly mixes horror and comedy.  Are there ghosts in the house?  Or is it something even worse?  Our main character is trapped in the house due to being on house arrest.  She may be going stir crazy from being trapped in there, but she is definitely not alone in the house. 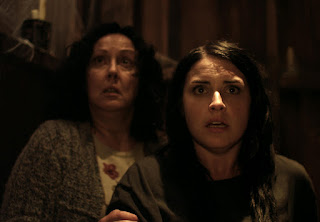 There are also many plot twists in this film.  Some you will never see coming!   Even after you watch the film the first time, and you know all the twists, the movie is still fun to watch.  As a horror movie, there are many scary elements, but as a comedy movie, we know it will have a good ending.  I highly recommend watching this film.  I will give it a 9/10.
Posted by Unknown at 9:00 PM No comments:

My new year's resolution is to post once at least once a week.  The last film I saw was The Palm Beach Story.  Which interests me because I love all things Florida.

I would say that this is one of the most funniest screwball comedies I have seen so far.  A woman, Gerry, is married to an inventor, who needs a lot of money.  After a rich old man gives her some money for no reason, she gets an idea.  She will divorce him and woo other rich men into giving her money, until she can raise what her husband needs.   Which is oddly noble.  Of course, her husband doesn't understand and tries to sabotage her at every turn. 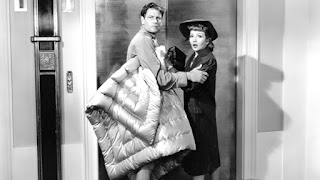 Despite having no suitcase, clothes, or ticket,  she somehow makes it Florida on the train.  There is a lot of physical comedy even though it stars a lady, which is refreshing.  This is better than most modern romantic comedies.  She also meets a handsome rich guy who is totally not a Rockefeller.

Her husband shows up, of course, and the rich guy's sister, a princess, falls in love with him.   Gerry and her husband turn down the chance to have tons of money for the rest of their lives and stay married to each other. The princess and her brother are disappointed, but they are told not to worry, because both of them are twins.  So, the princess and her brother marry the other couple's twins, and everyone lives happily ever after.  That was a very unexpected ending.  I will give this film an 8/10.
Posted by Unknown at 7:59 PM 1 comment:

Today's film is The Revenant.  We finally get to see a film that Leo gets his Oscar for.

Wow!  Let's talk about how beautiful Argentina is.  The real story of Hugh Glass takes place near South Dakota and Canada, but it was too hot during the time of filming.  So they moved it way down south to a similar climate.  Isn't it amazing that the further south you go, it turns into winter? That's crazy.  This film had the most beautiful scenery, and it was 90% natural lit.  They only used artificial lights during campfire scenes.  This makes me really want to go camping down there.  Just gorgeous.


This film is the mostly true story of Hugh Glass, a fur trapper up in the Dakotas.  He was attacked by a bear and left for dead by his group.  They even took several supplies and his gun so he was even worse off.  Through sheer determination, he somehow crawled 200 miles to the nearest fort and survived.  In real life, he was unable to do anything to the people who abandoned him, but in the film he gets his sweet revenge.

Leo really ramped up his acting skills in order to hopefully win an Oscar.  And it paid off.  Much of the time, he was alone in the woods, so he had no one to bounce off of. He couldn't even speak part of the time due to his throat injury.  And we still got to see the struggles he faced.  Amazing. 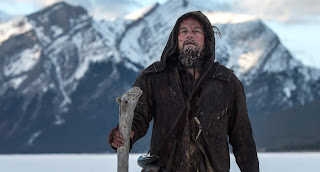 We don't know how historically accurate this is because, honestly, not much is written about Hugh Glass.  There is no record of any wife or children, but that doesn't mean there were none.  All we really know is what company he worked for, who was in his party, and that he survived a traumatic bear attack.  But his determination to survive against all odds is truly inspiring.  He is a true badass.  I will give this film an 8/10.
Posted by Unknown at 9:55 PM No comments:

Today's film is The Godfather part II.  This film is unique in two ways.  First, it is the only sequel that has won an Academy Award.  Second,  it is both a sequel and a prequel at the same time!

The problem with a film that is both a sequel and prequel is that you really really need to have watched the first Godfather film.  Or else you will be really lost.

The sequel part follows Michael Corleone, Vito's son and the new Godfather, as he moves his operation from New York to Nevada.  He has many enemies and his marriage is falling apart.  He goes with his so-called associate to Cuba, before the revolution hits, but is wary he is trying to assassinate him. 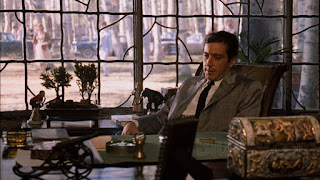 The prequel part follows the original Godfather, Vito, as he grows up in Italy in the early twentieth century and later escapes to America.  He is a honest, hard-working man that slowly changes into the Godfather that we see in the first movie.  Vito is played by Robert de Niro, who actually lived in Sicily to learn the correct dialect.  That is some real dedication right there.

A lot of the cinematography is very dark, and the colors are mostly brown.  Brown scenery, brown costumes, brown everything.  It's like the sepia filter on instagram.  They did go a little overboard on it.  The acting was really good, though.  So I will give it an 8/10.
Posted by Unknown at 9:00 PM No comments:

Today's film is The Bitter Tears of Petra von Kant, which comes to us from Germany.  Well, it's not really a plot-driven film, it's more of a character study.

Petra is like the worst kind of person.  The whole movie takes place in her bedroom/studio apartment.  She rarely leaves her bed, even to entertain guests.  That's really weird.  She treats her assistant like a slave, who does nothing but help her.  Petra is rude and ungrateful to everyone.

Petra works as a fashion designer, and much of the film seems to be showing off a slew of bizarre outfits, from all the characters really. 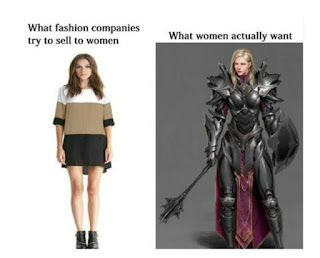 She falls in love at first sight with Karin, a beautiful blonde, who is married by the way. (!!!)  She asks her to move in and somehow Karin agrees.  Sure, Karin sleeps with her but doesn't feel the same way.  She's just using Petra like Petra uses her assistant.  Petra is so smitten that she even pays for the plane ticket for Karin to go see her husband.

Does Petra learn from her experience?  It doesn't look like it.  In the end, even her assistant leaves her.  If you enjoy watching character studies, or character-driven stories, this would be a good film for you.  I will give it a 6/10.
Posted by Unknown at 9:00 PM No comments:

So I've been on bedrest since I last posted.  I haven't been able to return to work and have spent most of my time in the hospital.  But now I've come home with my new addition, Jacob Finn!  He was born on October 4th and weighed only 4 lbs 9 oz.  He's even smaller than my daughter when she was born.  We've been relaxing at home since we got here.  Here's some pics of him with my husband.


Now that we are home, I am a full time mom.  Maybe I will return to my job when they are older, but maybe not.  I will return to regularly posting soon.
Posted by Unknown at 11:30 PM 2 comments:

Today's film is Umberto D..  It follows the story of a pensioner who is struggling to make ends meet.  As the films opens, we see a huge gathering of old people protesting their meager pensions.  It seems that Umberto has the worst deal because he has debts that his pay simply can't cover.  It is interesting that none of the other people have debts like this.  Does Umberto have any kind of savings?

He gets so desperate that he tries to sell off his possessions, like his watch and books.  But he doesn't having many possessions to sell.  He doesn't even have his own place - he rents out a room at a boarding house.  His landlady has increased his rent and now demands back rent too.  And she wants it all or nothing.  He doesn't have that kind of money.

Umberto doesn't seem to have any family, but he does have his beloved dog, Flike.  No matter what happens, Flike is there for him.  Umberto goes to the hospital a bit for his sore throat, and his landlady purposefully left the door open so Flike would escape.  While Umberto was gone, the landlady took the liberty of redoing his room.  The workers not only ripped off most the wallpaper, they did a really bad job.  And they left gaping holes in the wall too.  These people are worse than my HOA.

So now Flike is gone, but Umberto finds him at the shelter.  We witness some more sad scenes such as a petowner that can't afford the fee to release his dog, dooming him to the gas chamber, as well as seeing the dogs being carted to their deaths. 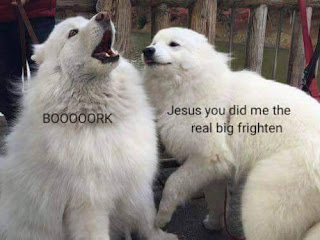 Umberto does have one friend in this world, Maria the housekeeper.  She is very young and is now pregnant.  So she is at the beginning of her life and starting a new life, while Umberto is nearing the end of his.  They both really need to leave the toxic environment of the boarding house in order to have a better life. 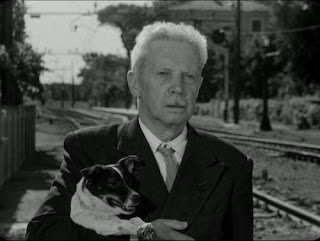 Umberto gathers what little money he has and leaves the boarding house.  He can't bring himself to beg on the streets, so he contemplates suicide.  He tries to leave Flike at a kennel, but is displeased with the poor conditions so he changes his mind.  Later, he almost gets hit by a train, which really frightens Flike.   He'd rather play with his stick and toys, so the film ends with them playing together.  We don't know what else happens to them but we hope they find somewhere to live.  The film is mostly a commentary on society forgetting elderly people.  Today we have more programs to take care of them, and Adult Protective Services can help those who are truly in need.  We have come a long way since the 50's.  I will give this film a 7/10.

More than likely you have already seen these movies, otherwise you wouldn't be on this blog. So many times I will have to include spoilers to fully describe my feelings about these movies. Just to warn you ahead of time.