Pauline is an awkward lonely teenage girl until she meets the new student, Juliet.  They both have a rebellious spirit, Pauline likes to doodle why Juliet is keen to correct the teachers.  Which is typically what we do at high school, but their friendship becomes incredibly strong.  They spend most of their time in a fantasy world involving the royal family in a castle.

The fantasy world is one of the best parts because that's where Peter Jackson shines.  I don't know how he made those giant clay people but they look freakishly real.  To me, the fantasy sequences are the most interesting part of the movie.  Otherwise, it's mostly a boring teenage friendship/romance plot.  They did interview the real Pauline who said that they were not lesbians, but that doesn't matter.  What matters is they spend so much time in their fantasy world that it becomes their reality, and they cannot stand to be separated.  What I don't understand is why they burned all of their Mario Lanza records. 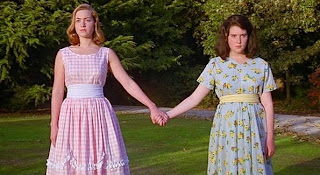 I was surprised at how brutally they killed Pauline's mother.  This shouldn't be a spoiler because it's a true story and it happened over 50 years ago.  They take turns bashing her in with a brick.  And all because she wouldn't let her go overseas with Juliet.  Ironically, after being arrested and convicted, Juliet and Pauline were never allowed to see each other again.  In real life, they both changed their names.  Pauline, now Hilary, runs a school and devotes her life to disabled children.  Juliet, now Anne, writes murder mysteries.  Well I guess she would be an expert in that.  Since this murder was famous, Peter Jackson decided to make a film focusing on their relationship rather than just the murder itself.  In fact, if it weren't a true story, you would never expect them to do that.  I typically don't like films like this, but it was well made.  Also, this is the debut of the main stars playing Juliet and Pauline.  I will give this film a 6/10.
Posted by Unknown at 11:43 PM

More than likely you have already seen these movies, otherwise you wouldn't be on this blog. So many times I will have to include spoilers to fully describe my feelings about these movies. Just to warn you ahead of time.